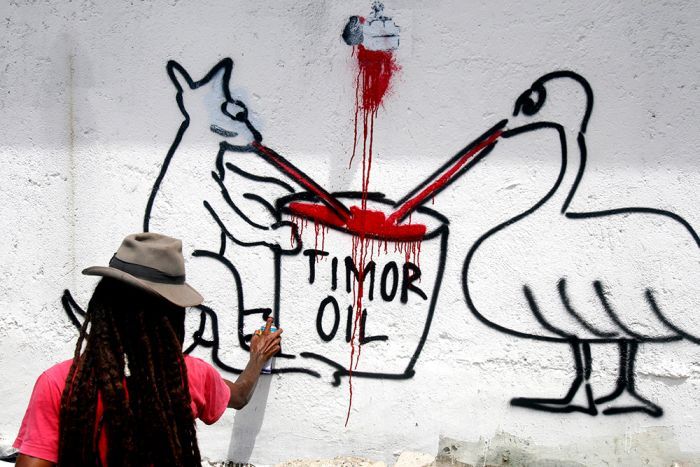 Dili, 05 Jun 2019 (Eureka Street) – Julie Bishop was all smiles in New York on the afternoon of 7 March 2018, as she signed the historic maritime boundary treaty between Australia and Timor-Leste — officially bringing to an end decades of dispute over the ownership of multi-billion-dollar oil and gas reserves buried in the Timor Sea, closing the door on a bitter and embarrassing part of Australia’s history, and ushering in what she’d later call ‘a new chapter’ for the neighbouring countries’ beleaguered relationship.

In Dili at the end of July — on her first and only visit to Timor-Leste as Foreign Minister — Bishop told a press conference she’d tabled the treaty in Australian Parliament, and it was ‘her hope’ that it would be ratified by the end of the year.

Fifteen months on from its signing, the treaty remains unratified — and Australia consequently continues to draw millions of dollars per month from a 10 per cent share in a field found to belong entirely to Timor-Leste.

The Timor-Leste Governance Project estimates that field could have generated $60 million over the preceding 12 months. Australia will provide $95.7 million in foreign aid to Timor-Leste between 2018 and 2019. Technically, we don’t owe that $60 million to Timor-Leste. There’s no legal right in the treaty for either country to claim compensation for lost revenue from the Timor Sea.

But Australia’s role in Timor-Leste’s historic and hard-won independence 20 years ago this August burnished our reputation as a beatific big brother — a reputation until now unmarred, despite decades of those fractious Timor Sea negotiations, allegations of our spying and serious accusations of collusion. For years, we’ve positioned ourselves as an international champion of moral righteousness, of sovereignty and of self-determination, and as Timor-Leste’s liberator. But we can’t have it both ways. Taking unearned Timor Sea wealth is another in a long line of Australia’s failure to do the right thing by Timor-Leste.

John Howard calls the Australian-led liberation of Timor-Leste one of our most noble acts of foreign policy this century — the peacekeeping part; not the preceding 30 years of heavy-handed economic encroachment in the Timor Sea. Our delay in ratifying the boundary treaty and our refusal to commit to repaying that unearned money is squarely at odds with how we think of ourselves in this story. And it’s unconscionably in breach of our moral duty to do the right thing by a neighbour.

In April the Guardian ran an exclusive stating Australia was accused of ‘siphoning’ millions in Timor-Leste oil revenue from the Timor Sea; an amount the paper said was more than we’d given Timor-Leste in foreign aid. Australia remains Timor-Leste’s largest, most financially generous and most important aid and development partner, and many Australian-funded projects provide significant and much-needed support and opportunities to Timor-Leste.

“We’re more concerned with excuses than with fronting up and admitting to ripping off Timor-Leste — again.”

But it’s laughable to say we’re concerned with Timor-Leste’s prosperity if we’re committed to scraping from its vaults more money than we give in foreign aid; to say we’re for its stability when we’re eroding a fragile economy’s ability to reinvest its resource wealth into education, health and agriculture; to champion regional security when we’re risking a generation of economic refugees with few job prospects at home and an in-fighting government. We’re more concerned with excuses than with fronting up and admitting to ripping off Timor-Leste — again.

Our history with Timor-Leste is long and chequered. We invaded the neutral territory of then-Portuguese Timor during World War II in an effort to stave off the Japanese. We fought bravely, and with crucial support from highly valued Timorese criado helpers — to whom we dropped ‘we shall never forget you’ flyers as we were evacuated to safety.

After 1960s seabed negotiations with Indonesia proved favourable, we turned a blind eye as the country invaded a newly independent Timor-Leste, murdering hundreds of thousands of its citizens — thinking Indonesia would be an easier negotiating partner over the Timor Sea.

And since Timor-Leste’s independence, we’ve signed a series of Timor Sea agreements assuming we have a far greater claim to its wealth than prevailing international standards say. We’ve spied on the Timorese government and prosecuted those who told the truth. With the 2018 New York treaty signing, you may have thought the story was over; we’d now do the right thing. Julie Bishop said this was a new chapter. The end of the greed, the collusion, the spying, the lies.

Timor Sea Justice campaign spokesperson Tom Clarke told the ABC in April it’s ‘incredible to think what Australia has attempted to get away with. It’s almost impossible to thing that we would treat another neighbour like New Zealand like this. It makes you think about why Australia has done this with one neighbour and not any other.’

Until now, we’ve believed our own story of Australia as Timor-Leste’s liberator. But until we loosen the economic restraints of the unratified maritime boundary treaty and its still-southward-flowing millions, Timor-Leste remains shackled — and our moral duty to do right by our neighbour remains ignored.