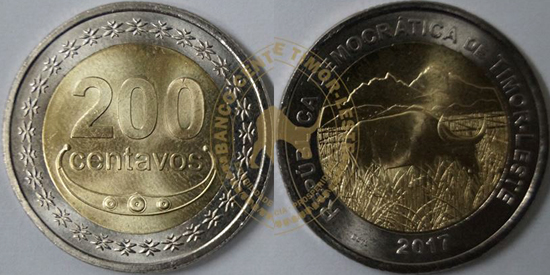 Timor-Leste has as of today a new currency of 200 cents, with a value equivalent to two US dollars, which aims to reduce the dependence and the high cost associated with the replacement of lower denomination notes.

The currency was launched today at a ceremony at the central bank’s headquarters in Dili, chaired by Prime Minister Rui Maria de Araújo, four years after the launch of the 100-cent coin in 2013.

The currency that comes into circulation today – coinciding with the 6th anniversary of the Central Bank – is added to the 100, 50, 25, 10, 5 and 1 cents that were already circulating in the country, where the official currency is the US dollar .

Abraão de Vasconselos, Governor of the Central Bank, said that the entity continues to watch over the circulation of money in Timor-Leste, essential for the country’s economy, and that it is important to reduce costs.

“The cost of repatriating one-dollar, five-dollar, and ten-dollar bills – which are damaged – is very high. Our goal is to continue to reduce spending on currency use,” he said.

Rui Maria de Araújo, head of the Government, welcomed the efforts that the Central Bank has been developing in recent years to help strengthen the Timorese economy, including as a ‘guarantor’ of the management of the Petroleum Fund, the main source of state funding.

With a diameter of 25.5 millimeters and a weight of 8.46 grams, the coin has a central golden core and a silver outer – identical to the one of 100 cents.

In the main face, and like in the other currencies, the one of 200 cents has a kaibauk, the traditional adornment of head used in Timor-Leste.

The verse has Matebian, the second highest mountain in Timor Leste and a place that served as a refuge for elements of resistance that fought against the Indonesian occupation, a buffalo and a rice field, central elements of national culture and economy.

The buffalo was already the main symbol of the Central Bank logo.

Sara Brites, deputy governor of the Central Bank, explained that the goal of introducing the new currency – with a face value of two US dollars – is to reduce the country’s dependence on lower-denomination notes.

“This currency will help significantly reduce the annual cost that the Government annually has to replace the 1, 5 and up to $ 10 bills, the most used and quickly damaged,” he explained.

The deputy governor explained to Lusa that the country is currently circulating about 16 million dollars in cents and that it is expected to distribute in the coming years about 6 million in the 200 cent coins.

Timor-Leste annually has to import all the coins and notes that are used in Timor-Leste which, in the case of North American bills, represents a high cost, especially due to the necessary security.

Coins were minted at the Mint in Portugal until last year and are now being minted in Australia.