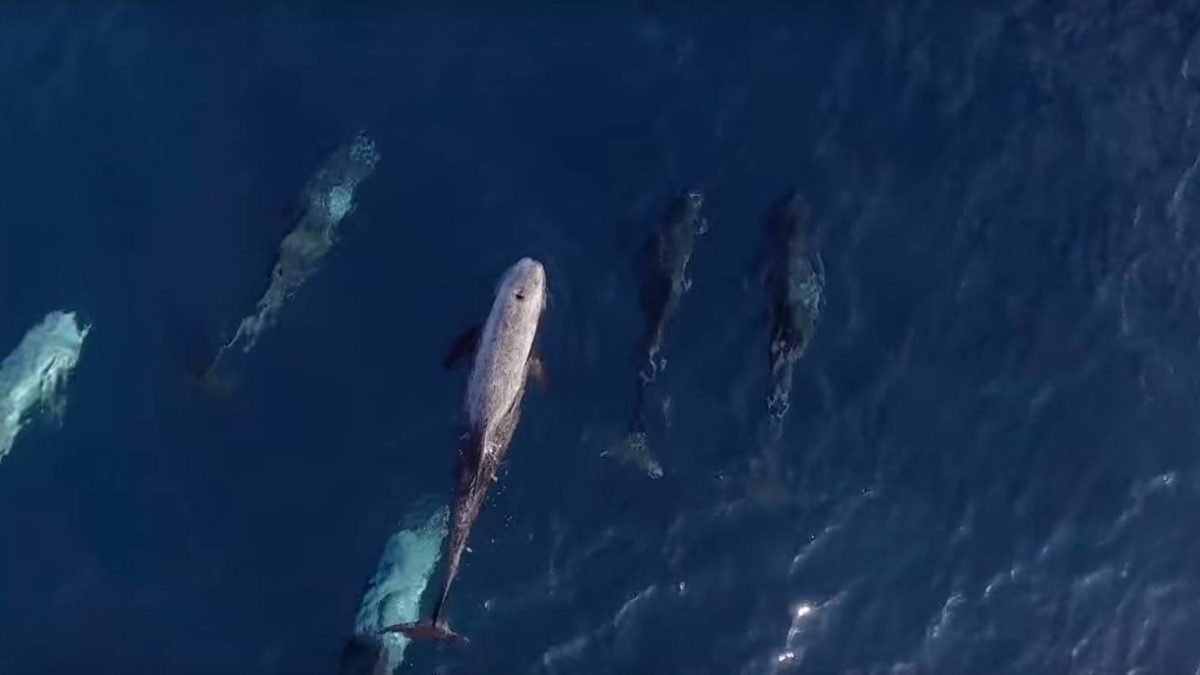 SZtv / Timor-Leste from Below
Video

Episode 5 of “Timor-Leste from Below” found an underwater superhighway in Timor Leste. Get ready for this not-that-speedy dive.

“In this episode, we show you a whale and dolphin superhighway Head skyward for a cetacean survey And get surrounded by a superpod of dolphins As we’ve seen already it’s clear that from below Timor-Leste is bafflingly biodiverse.”

However, its underwater treasures extend far beyond the coral-rich coastline… Right on Dili’s doorstep is a narrow channel plunging to depths of over 3000m.”

“This is the Ombai/Wetar Strait.”

“Fed by the Indonesian throughflow it is thought that about 30% of all the water emptying from the Pacific to the Indian ocean passes through this corridor of life.

“And with this mass movement of oceanic water comes some of its more massive inhabitants. Cetaceans, the collective name for whales and dolphins, are a common sight in Timorese waters.”

And with more than 20 different species of cetaceans, the Ombai/Wetar strait is a certified whale and dolphin superhighway.”

“To get an idea of just how many whales and dolphins there really are in this small stretch of ocean, I went to meet whale whisperer Karen Edyvane who’s got an interesting method of counting cetaceans.

“Not your usual scientific study, Karen’s survey involves following a set flight path before counting and identifying whale and dolphin numbers from out of the plane window. We have a pod of dolphins and maybe some whales But to get a clearer shot we were allowed to open the door. Better put this strap on, and maybe put that on top of my head as well, that would help. Whales – down there. With some valuable data recorded and the weather closing in, we headed back. “

“And when you think superhighway it’s an Indonesian through a flow that big current system that connects the Pacific Ocean to the Indian Ocean… you know it’s the largest amount of water movement on the planet.”

“That’s 5 million cubic meters of water per second. Flowing through a gap which is only 25km wide between Dili and Atauro. It’s a huge bottleneck.”

“And not only is it moving water but its moving things that live in the water as well. So it’s not just cetaceans but also pelagic fish and shark and turtles all coming through the Ombai strait as well. As I said, one-third of the water that comes from the Pacific Ocean, into the Indian Ocean, flows past Dili.”

“Whilst seeing cetaceans from the air was amazing, nothing quite beats seeing an animal up close. So there was only one thing for it, get out on the big blue myself.”

“Joining boat skipper Kevin Austin and his local crew of cetacean spotters we set forth, directly into traffic on the whale and dolphin superhighway. And sure enough, we weren’t disappointed. So we’re really lucky now.”

“Kevin thinks that we have spotted a pod of Risso’s dolphins out here. And they’ve got these very distinctive white heads. And there you can probably hear we’ve got the drone going up in the air, trying to get some aerial shots of them.”

“I’m just gagging to get in the water because I doubt there are that many people on the planet with pictures of Risso’s dolphins. With their beautiful markings and elusive nature, these dolphins would be an ideal underwater photography subject.”

“But as always the real challenge is getting close enough to fire off a photo. The characteristic white heads of Risso’s dolphins are the result of scarring from battles between males. They have evolved to remain unpigmented and thus appear white so that potential sparring partners can easily size each other up and see who has the most fights under their belt.”

“Despite clearly being in a few bouts they were still very afraid of me. This is so difficult. We are literally trying everything. But we have to remember that these are a very shy species. Kevin has only seen them twice in 3 years. We are trying everything, and I have had one more idea for a last throw of the dice.”

“So we’re using some floatation devices to try and maneuver us into a position so we can closer to these Risso’s dolphins. Urm, it’s quite intense. We can only go very slowly but this is still pretty difficult to work here.”

“Oh look, oo, have we seen them? We’ve seen them! Ah, still no luck. Oh no are the dolphins coming?”

“Coming our way. Dolphins are coming our way. We’ve not had much luck so far it’s really, really difficult – they’re so shy. But they’re coming this way again and yet again they are probably going to get within about 10 meters and then dive and then we’re gonna try again. It’s tough old work this wildlife filmmaking business.”

“Unfortunately, on this occasion, my plan didn’t work… and soon the dolphins left, unimpressed by our efforts.”

“Thankfully it wasn’t hard to find some more. We’ve just seen a superpod of dolphins who are feasting on a baitball over here. We’ve got birds on it as well. The tuna! Oh they’re coming right out the water.”

“A superpod is a when many different pods or family units come together to form a collective group. They can be made up of a number of different species and hundreds of individuals.”

“Scientists aren’t quite sure exactly why superpods like this form. It could be to protect themselves from potential predators, or maybe to work together to hunt fish.”

“But since cetaceans are such social creatures it could also just be for fun. From the sky to the sea, the Ombai/Wetar strait is an incredible place.”

“With one of the highest concentrations and species diversity of cetaceans worldwide, it is most certainly a whale and dolphin superhighway. And we haven’t even gotten to the big boys just yet…”

SZtv is the new channel of original stories about wildlife and conservation from Scubazoo, an award-winning, independent production company based in Sabah, Malaysian Borneo for the last twenty years.