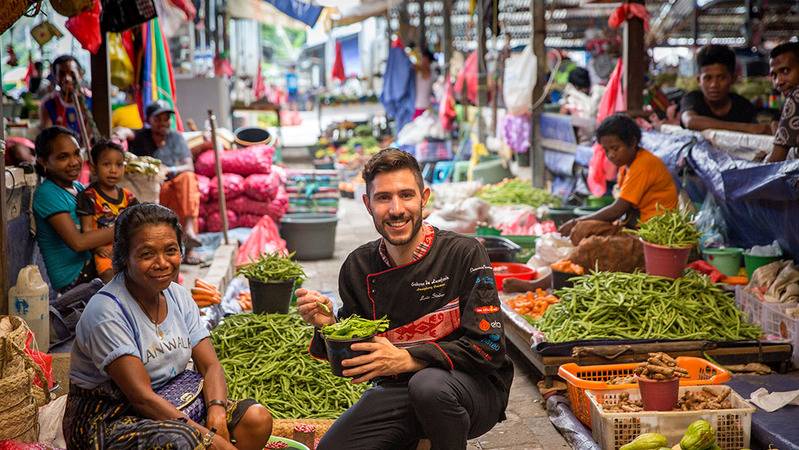 May 26, 2019 (DN) – Although Timorese people have achieved national faith and identity, 25 years of Indonesian occupation suffice to erase the culinary tradition of East Timor. Portuguese chef Luís Simões has been touring the country since 2014 to recover the memory of the island’s flavors. The cultural emancipation of a nation explained by the kitchen.

The conversation begins with the Saboko. It is a fish, goes to the bonfire wrapped in a banana leaf, carries chili, tamarind, and garlic. For follow-up it is made a puree of banana and coconut, they are fruits that grow here everywhere. If there is a Timorese national dish, this is it.

“A tradition that was lost during the years of the Indonesian occupation and is now being recovered,” says Luís Simões. “Saboko was once again found all over the island. When a dish is recovered, a whole tradition and an identity are recovered.”

Recovering the gastronomic culture of the island has been a life mission for the Portuguese chef in the last five years. “When I arrived here in 2014, I realized how Timorese gastronomy had been tampered with by the Indonesian presence,” he says, “the fritters were replacing what was once grilled or steamed.”

But it was not just that. They were the herbs that disappeared from the diet of the islanders, to make way for proteins that were not native. “This delicious, home-made food was disappearing from the recipe, people were ashamed of being gastronomy of poverty.” It was then that Luís realized the urgency of his demand. It was necessary to act before the memory was lost.

It is precisely to share this experience that the 29-year-old cook comes to Lisbon on Tuesday, where he will speak on the second day of the Guelra Blood Symposium – organized on the sidelines of the eponymous gastronomic festival whose motto is The Power of Food. Food. Luís Simões will speak on a panel that brings together critics, chefs and producers from various corners of the globe to tell how a collection of traditions has become a phenomenon of cultural emancipation.

Luís Simões realized very early that he liked cooking. At the age of seven, he was the one who prepared dinner for the mother and the three brothers. “My mother would go to work trying to feed us and I would help as I could, but I really enjoyed being there, making rice, frying sausages, and one day I killed my first chicken and stubbed it with tomato flesh. What I loved doing that. “

Family life, however, hardened. At the end of primary school, the mother would have to ask for help – and Luís was institutionalized in the Work of Friar Gil, in Mira. “When I was 14 years old I had my ideas well defined, I wanted to be the chef of this place wherever I went, so I went to the cooking and pastry course in a professional hotel and tourism school in Coimbra.”

He stayed in the College of St. Teotonius and applied himself to the formation. “I always had good grades and at night I went to the kitchen to practice. I remember my fascination when I started working with chocolate.” He used it on savory dishes, added it spicy, and in that process, he felt a sense of wonder. “I knew I had to continue learning. To do what I wanted to do, without family support, I only had one way: to be the best I could be.”

I wanted to apply for the Estoril Higher School of Hospitality, but as I had done technical-professional education I now had a problem: “Mathematics Exam could still do it, but how would I do the Geography test if I had never had a class on the subject? ” The solution came from a schoolteacher who lived in Coimbra, who was about to retire. “In two months he gave me two years of material. I took 14, I got in.” She was the first person in the host institution to be able to enter higher education.

He moved to the residences of the Superior School and became an exemplary student of the course of Food Production and Restoration. To make money, he used the institute’s kitchens and made caterings out. Afterwards, he started giving small cooking classes at the employment center. “The first time I entered a classroom, I was the youngest and I was the teacher, but I loved that experience.”

On the orders out and in the class I was accumulating a few changes. “I used the money to do unpaid international internships. If I wanted to be good at something, I had to give the liter.” He was at the Ritz Carlton in Tenerife at the Hilton in Prague, but the experience that would mark him was at Grupo Pestana in Sao Tome and Principe.

“By that time I was already doing my master’s degree in Hotel Management and Management, part of my job was to manage the hotel’s human resources.” In the African population, he encountered the same difficulties that he had experienced at the origin of his journey – and this made him understand one thing: “if you value someone else’s work you are contributing to development.”

From then on he had no doubt about it, he needed to see another world.

One day he received the call that would change his life. “The director of the Peniche branch of the Polytechnic Institute of Leiria, where I had done my master’s degree, gave my name to an Indonesian businessman who was going to open a hotel in Timor and contacted me.” At first, he said no, he had a solid job in the Pestana Group and went to the other side of the world. But the idea would not let him go – and Luis thought he did not want to regret what he had not done.

On 14 January 2014 he landed in Dili. “I thought I was going to find everything destroyed and after all, it was nothing like that, but I also thought that if I spoke Portuguese, when in fact the language was Tetum.” As he learned the basics of the local language, he taught English and Portuguese to the hotel staff. “It was my way of giving them a tool to outdo themselves.”

Curiosity for Timorese gastronomy has been increasing since the early days. Whenever a hotel employee became ill, Luís made a point of going to visit him to the home village – out of respect and willingness to see what was eaten in the huts. “The Timorese are extraordinarily ashamed, at first they did not want me to share their food roots. But, insisting, I was turning shyness into pride.”

Whenever he returned to the base, he would cook with the ingredients he discovered. “The diversity of chorizo, for example, is something incredible.” Then he would test, add banana and pumpkin, make skewers and light bonfires, try to understand Timor at the table.

In 2016, he began to make a television program called Sabor de Timor. He spoke in Portuguese, his assistant at the hotel in Tetum. He re-created the dishes and talked about the value of traditions-and now he had a crowd admiring him for worrying so much about what the people had become accustomed to writing. It would transform this recipe in the first book dedicated to the gastronomy of the country. It has the same name as the TV show and a preface by Xanana Gusmão.

Luís Simões no longer works at the hotel, but continues to collect revenue and teaches at the local university. Last week, he organized with the students a street food fair in the street Cidade de Lisboa, where there was a contest to choose the best sate, a steak skewer. “But perhaps nothing will know me better than to know that in the last year they have opened the first two exclusively Timorese restaurants in the city. As authentic food is valued, Timor becomes more Timor.”