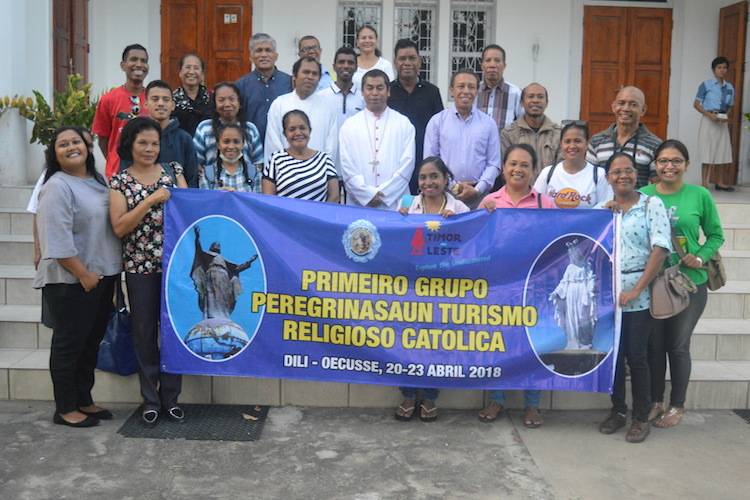 Dili, May 3, 2018 (Thomas Ora/ucanews.com) – Undaunted by its fledgling economy and tiny stature, Timor-Leste has started to develop religious tourism to give the fragile country a much-needed boost and help promote devotion to Catholicism in Indonesia.

Similar initiatives have been rolled out in the Philippines, another Catholic-majority country in Southeast Asia.

The Timor-Leste Church launched the campaign on April 19 in conjunction with the government by welcoming its first official batch of 28 “religious tourists” under the scheme.

The group made a pilgrimage to key religious sites in the coastal enclave of Oecusse District from April 20-24.

Etelvina Pinto, 60, who has worked for the last 35 years as a catechist at St. Anthony Church in Dili, said he had previously only heard about Oecusse but had never gotten the opportunity to visit before.

“It’s amazing. At my old age I just feel blessed to be able to see the sites and relics with my own eyes,” he said.

“I hope more people, particularly young people, will come to these places so they can stay closer to God,” Pinto added.

Rui Manuel, 32, is a member of the lay group Missionaries for Jesus Christ. He said now is the right time for the government to capitalize on religious tourism.

“This kind of spiritual pilgrimage further strengthens my devotion,” he said.

Luis Barreto, the 50-year-old chairman of the St. Therese of the Child Jesus parish council in Bedois, a suburb outside Dili, said the three-day spiritual trek was almost as awe-inspiring as a pilgrimage to Jerusalem for him.

“They both have the same kind of sacred ambiance,” he told ucanews.com. “The only difference is that those in Jerusalem are featured in the Bible and many people know about them and go there to pay homage to them,” he said.

“I hope the government will also pay attention to religious sites in other districts, too.”

The first Portuguese missionaries arrived in Lifau in 1515, 500 years before the district was reinvented as the Special Economic Zone of Oecusse.
Much of this heritage has been preserved in the form of Gothic churches built in the popular Portuguese style of the 16th century, a relic of St. Anthony, the lying statue of Jesus (Senhor de Morto) — only open for public veneration on Good Friday — Marian pilgrim sites, and more.

Lifau is in Oecusse, which borders the cities of Atambua and Kefamenanu in West Timor, which is controlled by Jakarta.

After Indonesia relinquished control of Timor-Leste in 1999 it took three years before it was able to emerge as a sovereign state in May of 2002 and join the United Nations.

Fernando Baptista Nuno, dean of the Faculty of Economics at the National University of Timor Lorosae, said developing tourism is part of the government’s strategic plan (2011-2030) to create diversified economic growth from non-oil and gas sectors.

“It’s good that the government has started to make tourism a priority,” Nuno told ucanews.com.

“Because since the country’s independence, the state budget heavily depends on oil and gas,” he said.

Visitors who travel from one place to another can boost the economy of local communities because they will buy unique crafts and local products.

From the aspect of education, it can provide opportunities for young people to learn a foreign language so they can become tourist guides.

“So, it will create more jobs,” he said.

There are four hotels and 20 inns in Oecusse that stand to benefit from this development.

“Currently, the number of visitors is low, unlike before the year 2012 when many UN staff visited the area,” said Alda Lay, owner of the Inay Sakato Hotel.

“We hope that by giving priority to the tourism sector, it will reinvigorate the sector and help local people.”

Father Angelo Salsinha, coordinator of the trip to Oecusse, said the church has identified dozens of religious tourism destinations, with the goal of preserving local culture and history, as well as boosting the economy.

“Many foreign tourists from countries like Australia, Portugal, India, Japan, Korea and Indonesia have expressed eagerness to visit Timor-Leste,” the priest said.

He said pilgrimages to Oecusse will be officially launched for international groups in August, in the form of two packages that run for 12 or 18 days. Christour Timor will manage the flow.

Robert Pangaribuan, who is in charge of Christour Timor — a subsidiary of Jakarta-based Christour — said the group is ready to cooperate with the government and local churches, and will encourage foreign tourists to visit Timor-Leste.

He said since 2013 he has organized about 200 Timorese pilgrims to visit the Vatican, Jerusalem, Israel and Fatima, with each trip costing an average of $3,000 per person. He hoped visitors and expats would spend similar amounts in Timor-Leste.

Each foreign tourist to Timor-Leste pays US$800-$1,500 on average, including their hotel, meals and transportation.

“This will greatly help improve the country’s revenue,” Pangaribuan said.

Antonio de Carvalo, a local village leader from Beneufe Citrana, where one of the prized relics is kept, hoped the government would fix the roads and build clean water facilities.

Bishop Virgilio do Carmo da Silva of Dili said it is time for the church and government to unite and develop forms of religious tourism that are rich not only on the spiritual side but also in social, economic, cultural and historical aspects.

“Sacred places are not only bringing people closer to God. They also have economic and cultural values,” the prelate said.

The bishop asked parish priests in Dili Diocese to stand on the front-line and work with the people who maintain these religious sites, not only in terms of keeping them clean but also creating the kind of atmosphere that gives pilgrims peace of mind.

Father Albino Marques, parish priest of St. Anthony Church in Oecusse, said the parish has prepared accommodation for tourists who want to spend time in the district.

“The local church will collaborate with the government to maintain the sites,” he said.

Vong said the government will build public housing replete with decent rooms and toilets around the sites to give tourists the chance to stay and mingle with Timorese families.

“The goal is to improve the people’s economy,” he added.

Similarly, Inacia da Conceicao Teixeira, the regional secretary for community tourism, said her team has trained communities how to make handicrafts such as weaving baskets.

“We have also trained a group of 15 young people to be guides,” she said.