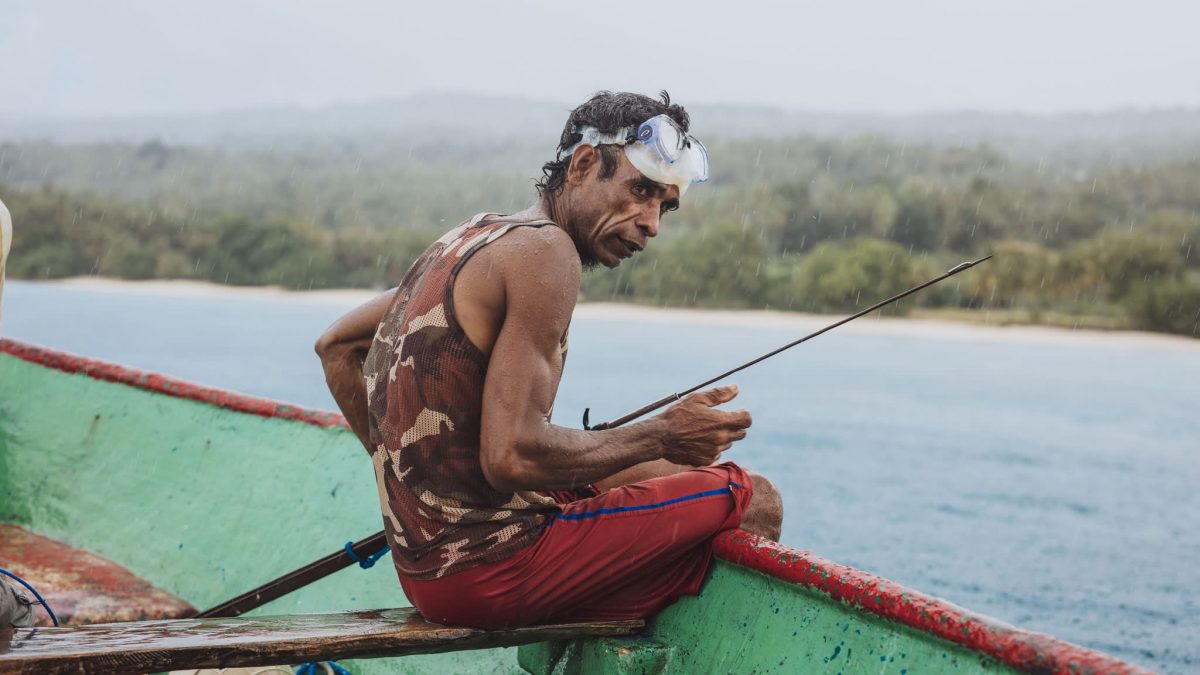 Ernesto Da Cruz hopes to use his local knowledge to become a tour guide. (Photo by Peter Guest)
Timor

COM, Timor Leste — Ernesto Da Cruz loads his spear gun and lowers himself over the edge of his fishing skiff, which is bobbing at anchor on a shallow reef off the northeastern coast of East Timor. Storm clouds have begun to congeal over the sea, coloring the water deep navy on the horizon, fading through indigo into crystal blue where it breaks against the cliffs.

Da Cruz ducks below the waves and swims out, his progress marked by a plastic float attached to the line of his harpoon. Moments later, he resurfaces, dragging the cord back to the boat to land a whipray, leopard-spotted and nearly a meter across, which thrashes wildly in the hull.

A tall, lean man in his forties, with a mullet hairdo and a red bandanna, Da Cruz honed his skills with a spear gun hunting the turtles — leatherbacks, loggerheads, hawksbills and olive ridleys — that used to be abundant in these waters, close to his home village of Com. “I used to be able to fill the boat with turtles in a day. Any big ones I saw, I’d kill them,” he said. On a good day, he could make $200 by selling the meat and shells.

Turtle hunting was common during Indonesia’s 24-year occupation of East Timor, a small, young nation on the tip of the Malay Archipelago. Blast fishing using explosives dropped from boats destroyed coral reefs, the sea grass beds that support the region’s endangered dugongs were ravaged, and coastal mangroves were cut back.

That exploitation left poor areas like Com, isolated and heavily dependent on fishing for livelihoods, further impoverished as fish stocks collapsed. Locals such as Da Cruz were driven by short-term necessity to hunt turtles and take whatever fish they could without a thought for the long-term impact on the ecosystem. “This is how we had to provide for our families,” he said.

Things began to change after East Timor’s independence in 2002. Since 2009, a concerted effort by local communities and Conservation International, a U.S.-based environmental organization, has seen the creation of Marine Protected Areas — no-take zones that allow reef fish to breed unhindered.

Much of the conservation work and day-to-day management of marine areas has been devolved to coastal communities under a traditional system of governance known as Tara Bandu, which had been outlawed under Indonesian rule. Turtles and dugongs are protected, and their numbers are rising steadily, as are fish stocks.

East Timor’s work on conservation has been a surprising success in a region that has often failed badly in protecting its ecosystems. Now, local communities and the government want to turn this ecological recovery into an economic one by finding new ways to support livelihoods in areas that still lack employment and basic infrastructure. For many people in Com, and in other coastal communities across the country, the expectation is that this dividend will come through tourism.

“This place has unique value,” said Sergio Jose Cristovao, Com’s Xefe Suco (village chief). People in the village have worked hard to move away from unsustainable practices and to protect their environment, he said; now they need new ways to prove the value of that work. “The natural resources we have are unique… we have to use them to attract tourists here,” Cristovao said.

“It’s all connected. We can attract tourists to come here again and see the things that we’ve been trying to protect,” said Robela Mendes, who runs the Sina Guesthouse, a four-room hostel with breathtaking sunset views over the sea, abutting a white sand beach where turtles come up to lay eggs at night. Mendes, a local conservation volunteer, also owns a small shop selling local handicrafts, and runs demonstrations of traditional dyeing and weaving techniques in her backyard. “It’s not just about having them come to our guesthouse. They can see the local products that we have here; it can give incomes to the whole community.”

There are now half a dozen guesthouses along the beach in Com. Conservation International has brokered deals with dive operators, linking the communities that manage East Timor’s marine reserves with businesses that can commercialize the resources. Divers will pay $25 or more per dive, and numbers will be restricted to limit the potential for damage — directly linking the value of the pristine reefs and rare wildlife to financial resources.

The government is backing this strategy, at least rhetorically. At the solitary gate in the tiny airport in Dili a TV plays an advertisement exhorting investors to put money into developing marine resources. And the infrastructure is being improved. The road from Dili to Com, mostly a spine-jarring dirt track, is being rebuilt by a consortium of Chinese companies. When the work is complete — possibly as soon as the end of 2019 — travel time from the airport to Com could be cut from between six and eight hours to three.

Tourism development is fraught with risks, however. Across Southeast Asia over-exploitation of wildlife and landscapes has sometimes had devastating impacts. Indonesia is now debating whether or not to restrict access to the island of Komodo, where giant lizards have long been a draw for visitors, to allow the ecosystem to recover. Last year, Thai authorities indefinitely closed Maya Bay on Ko Phi Phi Leh island to tourists, while Boracay in the Philippines was shut for six months because of concerns about damage to its coastline.

Trudiann Dale, Conservation International’s country director for Timor Leste, said the biggest risk is that the government’s enthusiasm for pushing tourism as a driver of economic growth could outstrip communities’ capacity to manage the influx. The entire budget for the tourism ministry is $1.2 million, she said, while the budget for protected areas is $150,000.

“The protected areas will underpin the tourism here because it’s going to be more about nature-based and adventure tourism; it’s never going to be the commercial, Bali type tourism,” Dale said. “Having the tourism dollar come in is going to be of huge benefit to communities… but we don’t want to end up in a crash and burn situation. That’s a risk that we’re all trying to avoid.”

Whether Com and its neighbors succeed in finding a balance between preserving and profiting from their natural resources could have far reaching implications. In early May, a new study from the Intergovernmental Platform on Biodiversity and Ecosystem Services, a United Nations-backed scientific body, released a landmark report declaring that nature is in an “unprecedented” and “dangerous” decline worldwide, with a million species at risk of extinction. The IPBES warned that humanity was “eroding the very foundations of our economies, livelihoods, food security, health and quality of life worldwide.”

One of the report’s findings was that ecosystems being managed by indigenous groups or community mechanisms — like East Timor’s Tara Bandu — are in general better preserved than those that are not. These communities more often than not take a “stewardship” approach to managing resources, which emphasizes long-term value over short-term gain, said Michelle Lim, a lecturer in environmental law at Adelaide University and an expert on the intersection of conservation and sustainable livelihoods.

The report also highlighted the dangers of seeking to translate the value of species and ecosystems into dollars and cents, and called for a reassessment of the paradigm of global development. Its message was that “a lot of the contributions that nature makes to human well-being aren’t sufficiently quantified or can’t be sufficiently quantified in terms of dollar value,” Lim said.

In Com, Da Cruz gave up turtle hunting years ago, and joined a community conservation group. Using his knowledge of where turtles and dugongs could still be found, he helped to locate and study the animals that he used to hunt. Now, he hopes to do the same for tourists.

Standing on a cliff top overlooking one of Com’s marine protected areas, he demonstrated how his relationship with the animals has changed. He clapped his hands and whooped loudly out across the sea. After a few minutes, a huge turtle surfaced in the water below. The animals have learned that people are no longer a threat and sometimes come when called, he said. “Look after nature [and] nature looks after you.”

AMP does not want to renew Mari Alkatiri's mandate in Oecusse

39th Anniversary of the Proclamation of Independence