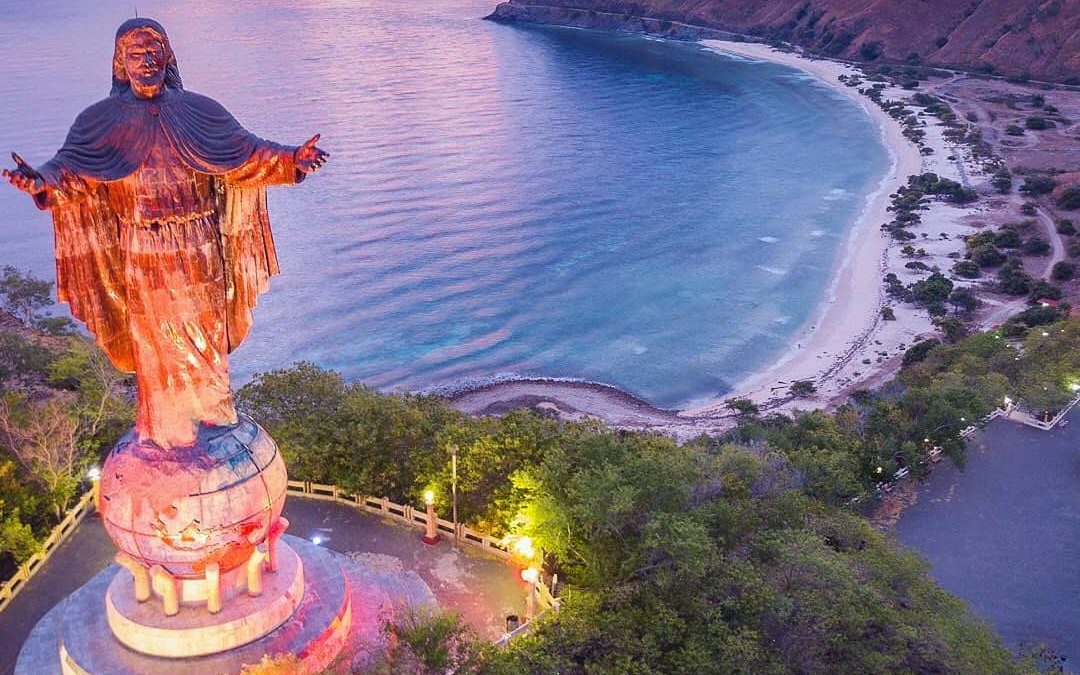 Dili, May 22, 2018 (Thomas Ora/ucanews.com) – Religious leaders in Timor-Leste have agreed to cooperate in developing religious tourism with the goal of improving the local economy and people’s livelihoods while also help them to grow their faith.

The Southeast Asian nation has been relying heavily on revenue from the energy sector, while other sectors such as tourism remain underdeveloped.

During a conference in Dili on May 18 titled “Peace, Harmony, Fellowship: Faith-based Tourism Development,” Catholic, Protestant, Muslim, Confucian, Hindu and Buddhist leaders made a commitment to collaborate on attracting more tourists to local religious sites.

Father Angelo Salsinha, who represents all dioceses in Timor-Leste, said there is much room for development considering the spiritual richness of the island and its lack of exploitation by the Church and government.

The Church, he said, has only developed some sites, such as Mount Ramelau — where a statue of the Blessed Virgin was erected — and Our Lady of Aitara in Manatuto district, established by Portuguese settlers.

Both attract a large number of pilgrims in October, a month dedicated to Marian devotion.

Other religious sites and festivals include the centuries-old Senhor Morto devotion on Good Friday in Oecusse district and a finger that is believed to have belonged to St. Anthony, now preserved in Fatuberliu of Manufahi district about 190 kilometers south of the capital.

He said there are only three countries that keep relics of St. Anthony, including Portugal and Italy.

“So there’s a possibility for Timor-Leste to be one of the world’s destinations for pilgrims,” he said.

Father Salsinha said the local Church is now developing other areas including historic churches and the site where three priests were murdered in Covalima district during the war in 1999 when an independence referendum was held in the former Portuguese colony to break away from Indonesian rule.

“Now the Church is organizing how to best manage these sites. Parishes and convents are also being prepared so they can accommodate pilgrims,” he said.

Muslim cleric Abdulah Said Sagran welcomed the cooperation among the different faiths as a positive sign.

“It will unite and strengthen our ties,” he said, adding the An Nur mosque in Dili could be a good place for tourists to come and learn about Islam.

Islam arrived in Timor-Leste just before World War I. In 1955, Muslim communities built the An Nur mosque. When it was renovated in the early 1970s, Bishop Jaime Garcia Goulart of Dili donated bricks.

“So there is a good story to tell there,” Sagran said.
Siu Peng Lay, a Confucian leader, said every year there are many tourists from Taiwan, Hong Kong, Singapore, and Indonesia, but local authorities have struggled to find any Chinese contributions to Timor-Leste to appeal to them.

“We have been considering building a monument to martyrs of Chinese descent who were killed during the Indonesian invasion in 1975,” he said.

“We want our ancestral heritage to remain well preserved,” he said.
Sarmento called on the government to improve road infrastructure and people’s homes near tourist destinations, including providing toilets and clean water.

Agio Pereira, a spokesman for Prime Minister Rui Maria de Araujo, said developing tourism has been part of the government’s strategic plan for 2011-2030.

“It’s is an important sector, like agriculture and energy,” he said.

“I hope the government steps in to support religious tourism to create more employment opportunities for the people here,” he said.

“How about Timor-Leste?” by a Traveller