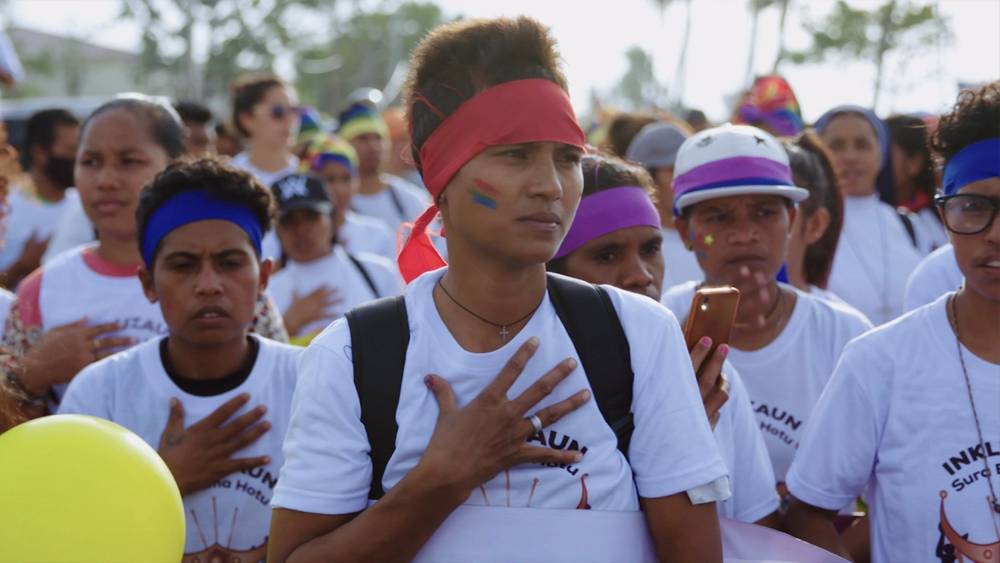 22 May 2019 (VICE/Adi Renaldi) – The nation of Timor-Leste is predominantly Roman Catholic. Yet it’s leading a fight for LGBTQ rights in a part of the world where such rights are increasingly under attack.

On a sunny morning last July, thousands of Timor-Leste residents took to the streets of Dili. Clad in white shirts, gripping rainbow-striped banners, and flags, they were there to celebrate the city’s annual Pride Parade. What began in 2017 with a few hundred attendees now welcomes an annual turn-out of 1,500, along with a procession of floats and a marching band—all to celebrate inclusivity and support the nation’s queer community.

“We have people from all sorts of backgrounds this time,” explained LGBTQ activist and member of the Pride Parade committee, Natalino Guterres. “I’m so happy to see them march and be proud of who they are.”

The parade is just one part of the nation’s LGBTQ community’s ongoing fight for acceptance. National independence heroine and LGBTQ activist Bella Galhos has conducted extensive research into the experiences of Timor’s LGBTQ population and found that 86 percent of the community have experienced psychological and physical violence, much of which comes from family members.

The Pride Parade is a symbol of celebration and liberation for the entire LGBTQ+ community. From its early days of activism on Christopher Street in New York City, to the worldwide celebrations of today, it has empowered and given voice to a bright and vibrant community.  Check out Google Doodle.

“The biggest obstacle the LGBTQ community in this country faces is their families,” Galhos reflects. “After they come out to their families, they face rejection. Sexual, physical, and mental violence. And that’s just from their families. What can you expect from this society?”

Bella is no stranger to abuse: she was only three when her father sold her for US$3 to an Indonesian soldier, describing her as having a “dominant, masculine personality.”

This kind of abuse was visible all around while she grew up. She recalls a transgender woman being abused by her family and dragged around her village in an attempt to “cure” her. “Her brother tied her up, stripped her naked, and dragged her from a car,” Bella said. “He took her around the village just to humiliate her.”

Since 2000, Bella and her partner have run Arcoiris, a shelter for LGBTQ victims of violence. The name, fittingly, is rainbow in Portuguese. She currently has four people staying at her shelter.

Violence has also been a constant in the life of LGBTQ activist Romiaty da Costa Barreto. From a young age Romiaty, who is a transgender woman, was aware of her gender identity and expressed it by wanting to wear women’s clothing. But when she did she was taunted by others in her village and accused of bringing shame to her family. In the years since Romiaty has used this experience to open up a dialogue. “I’m used to facing people head-on,” she said. “We need to make friends and educate.”

Despite the violence, persecution, and discrimination faced by the LGBTQ community, Timor-Leste is a relatively progressive nation when compared to other parts of Asia. In 2017, Prime Minister Rui Maria De Araujo spoke out openly in support of LGBTQ rights, becoming the first Asian head of state to do so.

“Every person has the potential to contribute to the development of our nation, including the LGBTQ community,” he said.

Araujo’s support has continued in the years since. Last year he sent representatives to the Pride Parade to march in solidarity.

Interestingly, many queer individuals have also found support within the Catholic Church. While the church hasn’t taken an official stance in support on LGBTQ rights, many congregations have got involved to support the community. A nun even volunteered to lead the prayer at the 2017 Pride Parade.

Via,* a nun and LGBTQ volunteer who took part in the 2018 pride parade, explained that many in the church are concerned about the discrimination faced by the community. “We as the Catholic church believe that LGBTI people are God’s creation. Because they’re not making it up, they were born that way.”

But while individual and organizational support is encouraging, the LGBTQ community still faces many obstacles when it comes to living life safely and openly. The government has yet to make regulations that truly protect the rights of LGBTQ people; even though Timor-Leste signed a joint statement on ending acts of violence and related human rights violations based on sexual orientation and gender identity in 2011.

As a result, LGBTQ individuals still face discrimination in Timor-Leste. According to Romiaty, LGBTQ citizens often have difficulties in accessing public health facilities. Her status as a transwoman also makes it difficult for Romiaty to change her name.

“For transgender people, one of the biggest challenges is to get ministry jobs, like working in Governor’s offices. Dressing as a woman when applying for a job in the government is also very hard,” said Romiaty.

Despite all the difficulties, Bella Galhos is optimistic that the future of Timor-Leste’s LGBTQ population is as colorful as a rainbow.

“Timor will change. Must change. Because we say so. And not only do we say it, we do it,” she concluded.

This and more articles on VICE.