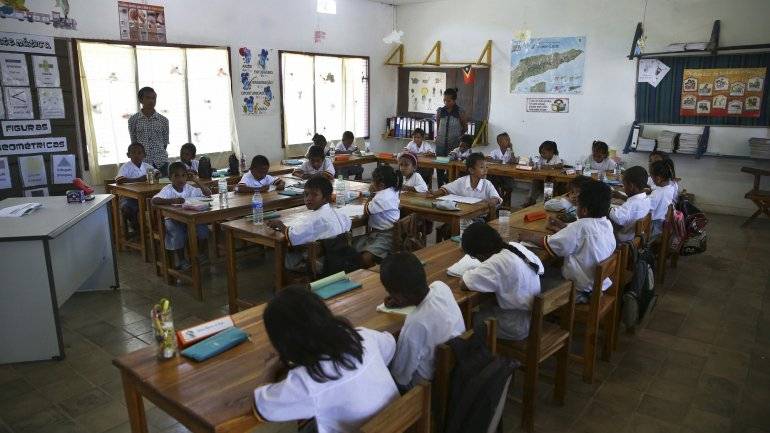 The Minister of Education of Timor wants to implement a reformulated version, more focused on the Portuguese language, of a teacher training project that ended this month, counting on Portugal.

The Timorese minister of education said this Friday that the Government continues to rely on Portugal to implement a reformulated version, possibly even more focused on the Portuguese language, of a teacher training project that ended this month.

Dulce Soares was referring to a new version of the Formar Mais project, which involved 26 teachers who since 2016 have been seconded to schools throughout the Timorese territory involved in training local teachers and supporting school management. “The evaluation [of the project] was very positive and the will is to be able to continue the project in the future. The proposal has been prepared three months ago, we had meetings with personnel of the [instituto] Camões and it is only necessary to formalize, “he explained.

Soares said that this new project is foreseen in the Strategic Cooperation Program (PEC) – to be in force between 2019 and 2022 – to be signed shortly between the two countries. “For me, it should be more Portuguese, with a focus on the Portuguese language,” he said.

“With the experience of trainers and trainees, we will try to improve the project. I think a lot of things have to be improved, but we have to continue with the project. On the Timor side with even greater size. But it depends on the negotiation with Portugal, “he said.

Dulce Soares was speaking to Lusa on the fringes of a seminar in Dili that served to analyze the project, in which she highlighted the importance of the program and called on Timorese graduates to continue the initiatives begun by Portuguese teachers.

“These trainers left spaces built and rehabilitated that serve the well-being of everyone in the school, such as libraries, sports venues, and others,” he said. “The training they have received must continue every day to improve pedagogical practices and continue to speak Portuguese so as not to let the level of proficiency go back,” he said.

Already the responsible for cooperation of the Portuguese Embassy in Dili, Cristina Faustino, said that the project shows the “commitment of Portugal to support the efforts of the Timorese Government in spreading the Portuguese language… to allow access to quality education, science and culture “.

In an analysis of the project, Cristina Faustino highlighted the decentralization of training, with Portuguese teachers being seconded to educational establishments in the municipalities, allowing pedagogical action and monitoring of teachers on a daily basis.

“Students and teachers benefited from the best educational practices in Portuguese but based on the Timorese curriculum,” he said, noting as “less positive” the fact that, at the secondary level, trainers remain in schools for short periods.

The Portuguese official welcomed the efforts and commitment of the trainees, many of whom traveled for long distances and with irregular transports, to participate in the training and also the “dedication and sense of commitment on the part of the trainers” who worked with “spirit of mission”.

The project Formar Mais, one of the main Portuguese support initiatives for the ongoing training of East Timorese teachers, started in 2016 with 11 teachers who will work in the component of the 3rd Cycle of Basic Education and 15 in the various disciplines of the Timorese General Secondary Education. Timor-Leste financed about 75% of the cost of sending teachers to the country.

The teachers, who participated in training courses at the University of Aveiro, complemented by sessions held at the Camões Institute, worked in Timor-Leste in conjunction with the National Institute for Training Teachers and Education Professionals (Infordepe), where the seminar Friday.

Formar Mais is a project that results from a partnership between the Ministry of Education of Timor-Leste, through Infordepe, the Ministry of Foreign Affairs of Portugal, through the Camões Institute and the University of Aveiro.

The general coordinator of the project, Raimundo José Neto, emphasized its importance in the ongoing teacher training process, which sought to respond to some of the system’s shortcomings. Aspects such as the lack of professional training of teachers in the active, answers to the demands of the teaching career regarding essential competencies and the need to consolidate Portuguese and to implement curricula in force were analyzed.

"How about Timor-Leste?" by a Traveller