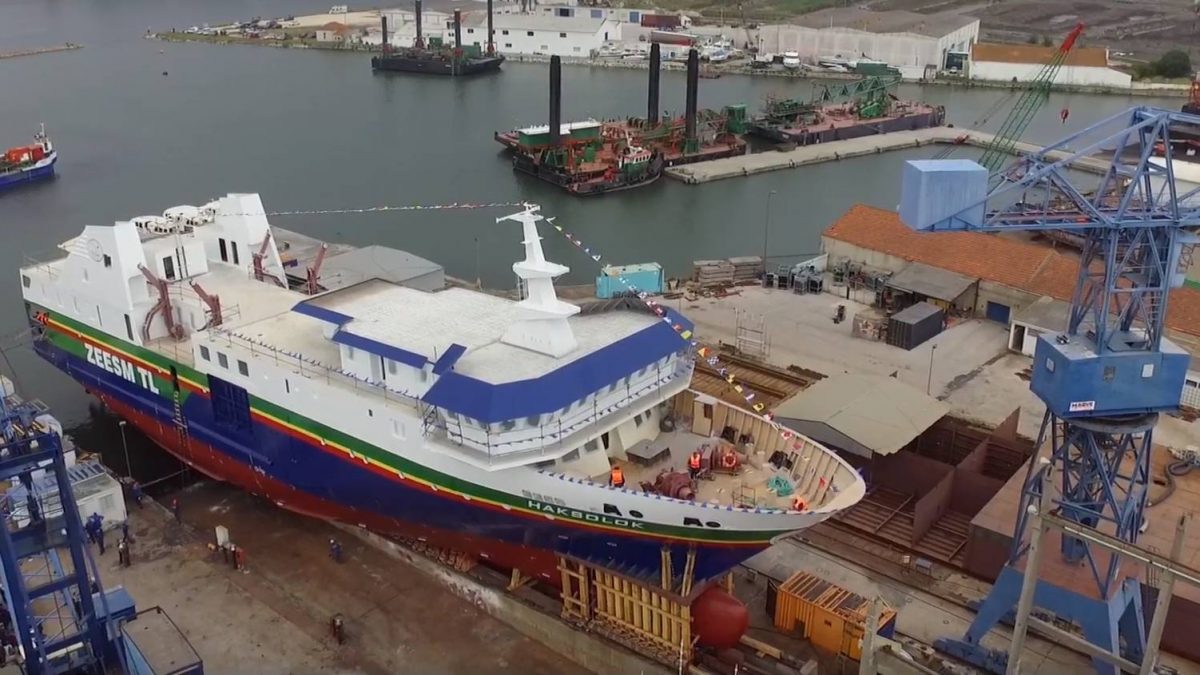 Dili, May 28, 2019 (Lusa) – The construction in Portugal of the Haksolok ship destined for Timor-Leste, which is already three years behind and the construction of two pontoons for its operation, will cost a further 14 million USD (12.5 million of euros), according to Timorese officials.

This figure, according to officials from Timor-Leste, amounts to about $ 16 million ($ 14.3 million) already paid for the project that is still unplanned, affected by financial problems in companies involved in construction, in Portugal.

With the capacity to carry 377 people and 25 cars to connect Dili to Ataúro Island and the Oeno-Cusse Ambeno enclave in Timor-Leste, the process of acquiring the ship began in 2014 by the Timorese Central Government, Administrative Office of Oecusse-Ambeno (RAEOA).

Transport and Communications Minister José Agustinho da Silva, who visited Portugal last week, told reporters on Monday that a $ 14 million (12.5 million euros) indicated that this amount applied only to the ship.

“The contract with Portugal’s Igen Shipbuilding company has already had a budget allocation of 13 million, but the construction is not yet finished and so it requires an additional budget of 14 million dollars to finalize the construction of Haksolok,” he said.

Mari Alkatiri, president of the Oecusse-Ambato Special Administrative Region of Oecusse-Ambeno, told Lusa that the value of $ 14 million includes not only what is missing on the ship itself, but also part of the two pontoons (at a cost of three million each) in the enclave of Oecusse Ambeno and on the island of Atáuro.

According to him, the total expenditure of 16 million dollars to date includes 70% of the ship, already completed, 50% of Oecusse’s pontoon and the purchase of steel for the Ataúro pontoon.

“The management of the company (in Portugal) has been catastrophic and was not able to meet our expectations. But there were also mistakes at the start,” he explained.

Alkatiri said that the audits carried out on the project show the high quality of the ship and reject the attempt to hold only RAEOA responsible for the problems of the project.

“This began with the central government, the contract was awarded by the government in 2014, when there was not even RAEOA, and then it was transferred to RAEOA,” he said.

The contract for the construction of the “Haksolok” ferryboat was signed with Atlanticeagle Shipbuilding in September 2014. Work started in 2015 but has been inactive for several years.

The project was included in an audit of the Chamber of Accounts for the projects of the Oecusse-Ambeno enclave in 2014 and 2015.

“However, all these deadlines have been largely exceeded, since delivery has not yet occurred until the date of preparation of this Audit Report,” notes the Chamber of Auditors.

The delays were initially due to “the difficulties experienced by the company in presenting the guarantee necessary for the start of the performance of the contract and the guarantee that it could receive the advance.”

These difficulties led to a change in the form of the guarantees to be provided, through the conclusion of the addendum to the contract, which took the form of sureties. Nevertheless, there were delays not attributable to the company that still need to be duly clarified, “the report said.

In a clarification note, RAEOA / ZEESM explained last year that the Portuguese entity Instituto de Soldadura e Qualidade (ISQ) was contracted to supervise the construction and “everything was done in order to guarantee the success of the project and the construction of the Ferry Ro -Ro, respecting the best international standards “.

Currently, “due to legal problems between Atlanticeagle Shipyard and its subcontractors, which have weakened the financial situation of the Shipyard, construction is suspended and the ferry at the Mondego Shipyards remains.”

“It is important to stress that the problems between the Shipyard and its sub-contractors are alien to RAEOA-ZEESM TL, but that RAEOA-ZEESM TL is still in a proactive position, seeking solutions that will unlock the situation and allow the construction of the Ferry Ro -Ro “Haksolok” with the desired quality and specifications, and in compliance with the latest international maritime conventions, “he said.

The region currently has in Portugal “judicial agents with the purpose of guaranteeing the representation of the interests of the State of Timor-Leste and finding solutions that allow the completion of the ferry as soon as possible and consequently its service to the populations.”

Office of the President of the Authority of RAEOA-ZEESM TL wrote:

“Having heard the issues raised in the National Parliament of the Democratic Republic of Timor-Leste (the “RDTL”) on the state of construction of the “Haksolok” Ro-Ro Ferry, the Oe-Cusse Ambeno Special Administrative Region (“RAEOA” ) and the Special Zones of Social Market Economy of Timor-Leste (the “ZEESM TL”), in compliance with the principle of Open Administration and seeking a transparent management and action, hereby provide clarification on the project and its status of execution.”

“It should be clarified that the decision to purchase and award the “Haksolok” Ro-Ro Ferry, which includes the selection of the Shipyard, was initiated by the V Government of the Democratic Republic of Timor-Leste, headed by His Excellency Kay Rala Xanana Gusmão while Prime Minister, and represented by the Minister of Transport and Communications Eng. Pedro Lay da Silva, who signed the contract with Atlanticeagle Shipbuilding Lda. (Atlanticeagle), on September 22, 2014.”

“To ensure compliance with the specifications of the “Haksolok” Ro-Ro Ferry and the registration status of the ferry (Madeira International Ship Registry in Portugal), previously defined by the RDTL Government, RAEOA-ZEESM TL, contracted as a Consultant for the supervision of construction the Institute of Welding and Quality (the “ISQ”), a Portuguese entity, with more than fifty (50) years of experience in similar projects and credentials respected at national and international level.”

“Since the transfer of the RDTL Government project to RAEOA-ZEESM TL, everything was done by the latter to ensure the success of the project and the construction of the Ro-Ro Ferry, respecting the best international standards, having always honored all commitments made by the Government of RDTL, to Atlanticeagle Shipyard.”

“Regarding the current status of the project, due to legal problems between Atlanticeagle Shipyard and its subcontractors, which weakened the financial situation of the Shipyard, the construction is suspended, with the Ferry remaining in the Mondego Shipyards. It is important to emphasize that the problems between the Shipyard and its sub-contractors are alien to RAEOA-ZEESM TL, while RAEOA-ZEESM TL is still in a proactive posture, seeking solutions that will unlock the situation and allow the construction of the Ferry Ro -Ro “Haksolok” with the desired quality and specifications, and in compliance with the most recent international maritime conventions.”

“It should also be clarified that there is currently no arrest or other burden on the Ferry Ro-Ro “Haksolok”, and that the Shipyard is not insolvent, repudiating the RAEOA-ZEESM TL, any news in this respect that for political use has consequences in the implementation of the project and cause incalculable and unacceptable damage to RDTL.”

“RAEOA-ZEESM TL has constituted in Portugal, legal representatives with the purpose of guaranteeing the representation of the interests of the State of Timor-Leste and finding solutions that allow the completion of the Ferry, as soon as possible and consequently its service to the populations.”

“As part of the steps planned by RAEOA-ZEESM TL, in order to obtain solutions for the conclusion of the Ferry Ro-Ro “Haksolok”, an inspection of the Ro-Ro Ferry “Haksolok” by international consultants is being finalized for exemption and autonomy to verify the execution and quality of the same, waiting for the presentation of the report in the first half of August.”

“RAEOA-ZEESM TL continues to believe in the Ro-Ro “Haksolok” Ferry project, maintaining a good institutional relationship with the Shipyard, and cooperation to ensure the completion of the work.”

Office of the President of the Authority of RAEOA-ZEESM TL

Unicef delivers medical equipment to Timor-Leste to fight the disease