Home > News > Travel Around the World Pass Through Timor 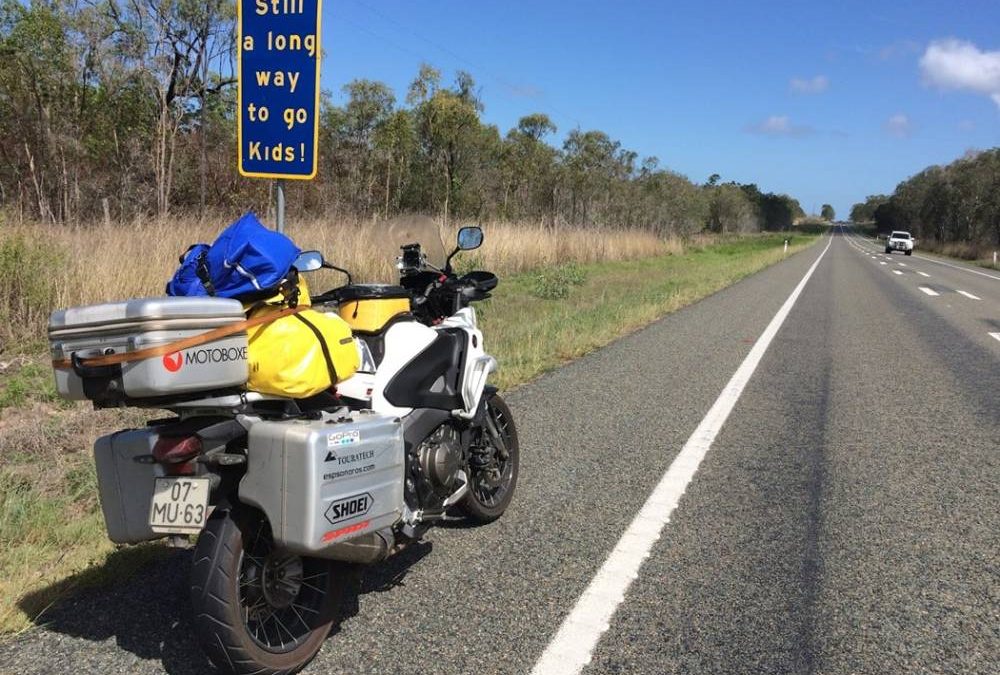 At age 63 the veteran pilot successfully completed a World-sized trip. Around the World in Honda Crosstourer began in 2012, and more than seven years later came to an end with many stories, adventures, and especially a new vision of what our planet and different cultures are.

Francisco Sande and Castro, 63, decided that Portugal and its roads were already too small for their ambitions as an adventurer, and it was then that he made the decision to complete the return to the world of motorcycle.

To that end, Francisco Sande e Castro started negotiations with Honda Portugal in 2012, launching the challenge to Carlos Cerqueira, the head of marketing for Honda Portugal, who had no great doubts when deciding to support this “crazy idea”, and the spirit revealed by Francisco during these pre-trip conversations led Honda Portugal to take part in this trip the size of the World.

That’s how, in September 2012, Francisco Sande e Castro took off on command of a Honda VFR1200 Crosstourer. The initial goal would be to complete the trip in 2 years and may, maybe three. But as in so many other situations in our lives, goals change, and there is a need to change plans to achieve even greater goals.

The first part of the trip led Crosstourer across Europe from one end to the other. Perhaps the easiest part of the adventure, and that served as perfect warmth for what was then to follow. Francisco Sande e Castro had no doubts as to which route he had to score, and after crossing Turkey he went straight to Iran.

It was there that, in the words of the adventurous Portuguese motorcycle rider, he went through what was the most complicated situation of his trip around the World: he decided to stop at the foot of an Iranian nuclear center. With no one around, he decided to take a picture of the Iranian installation.

What followed was worthy of a spy movie! Francisco Sande e Castro was immediately approached by Iran’s military services, asked about the reason for being there and why he was taking pictures.

The Portuguese motorcyclists, surprised by what was happening to them, defended themselves against the espionage accusations as they succeeded, and when fate had already appeared and included an Iranian prison, a final diplomatic effort on the part of the Portuguese authorities allowed Francisco Sande and Castro continue his voyage from Crosstourer.

He then went to Southeast Asia where he spent a lot of time. In Thailand, she received the encouragement of her daughter’s presence. The pair then opted to go back to Thailand before Fransciso Sande and Castro’s daughter returned to Portugal. The journey would have had to continue, but already to the ground, as it had happened until then.

By boat, he traveled to Indonesia, then to Timor. He was in Dili, before being forced to return to Portugal for professional and personal commitments. These returns, which happened several times over the years, were one of the main reasons for extending the journey beyond the originally planned three-year deadline.

Honda Crosstourer remained in Dili, stopped in the parking lot of a hotel, for about six months, waiting for the return of his driver. Free of the commitments that bound him to Portugal, Francisco Sande e Castro there reconnected his motorcycle and resumed the trip around the World.

From East Timor, the goal was Australia. While the motorcycle was slow to reach the Australian mainland by boat, Francisco Sande e Castro was already in the land of Aborigines and Kangurus because he had traveled by plane. With the bike late, she had time to visit the Fiji Islands, though without the company of her faithful two-wheeled companion. It was an enriching experience, says Francisco, and at the same time allowed him to rest a little.

After meeting with his Honda, the next destination was Japan. There he was “obliged” to visit Honda’s headquarters at the express request of the chief engineer responsible for the creation and development of Crosstourer, who learned of this adventure and not wanted to stop meeting the Portuguese motorcyclist who had set out to go around the world.

During the visit to Honda, the Crosstourer underwent a deeper review: it received new tires, oil and filters were exchanged, and it was washed in conditions to face what was supposed to be the last part of the trip: to cross the USA.

From Japan the bike then traveled to the west coast of North America. From Los Angeles, California, Francisco Sande e Castro headed north, traveled along the American coast to Seattle, then crossed the US to the Atlantic coast with final destination in Washington DC. The initial forecast was that this was the end of the adventure, but the Crosstourer still had much to give, so Francisco Sande and Castro made the decision to extend the trip to South America and then Africa.

He went down through Mexico, and crossed Central America without major problems, even though he was warned of the dangers that awaited him in countries like Guatemala or Nicaragua. But the biggest problem that he faced in this journey towards the south was even able to cross to Colombia, because the forest is insurmountable by land.

He had to catch a boat, he was able to enter Colombia, and he went on to Argentina, Peru and Chile. After many miles along the Pacific Ocean, the turn to Argentina brought Francisco Sande and Castro back to the Atlantic. It was then that he went up to Brazil.

It was already in Vera Cruz lands that she felt the danger more closely. While descending the Amazon River by boat, his entourage was approached by pirates. Luckily nothing bad happened, and the journey went on without major problems. It was not frighting.

In Brazil the Honda Crosstourer was re-packed and transported by boat. After a long crossing, the bike and Francisco Sande e Castro finally reached the African continent, namely South Africa. This last part of the trip was the one that cost him the most, admitted on arrival in Lisbon. The option to go West Africa from south to north, and despite all warnings not to do so, was taken. Francisco Sande e Castro and Honda Crosstourer already had Portugal in “spotlight”. Only the final effort was missing.

And what an end! Going through African sections and paths was an almost transcendental experience, both physically and psychologically. Countries like Democratic Republic of the Congo, Gabon, Cameroon or even Nigeria took Francisco Sande and Castro to the limit of their forces.

Endless mudslides in which he had to rely on the help of those who lived there to overcome these challenges, fell into holes in the middle of the jungle, fortunately without major physical consequences, but that forced him to wait for hours and hours to the heat, with the help of someone who would come in to help out of the hole, for he alone could not lift the Crosstourer, still loaded with suitcases and luggage.

But Portugal, and Lisbon, were already “just around the corner”! Making his strengths of weaknesses, Francisco Sande and Castro managed to reach the end of this epic journey that was being carried out in the mouths, or the “mouthwash” as he himself defines it. But that does not detract any merit from what this adventurous motorcyclist has been able to do! There are not many who can boast of completing a round the world. Much less motorcycle. And after 60 years even less. Portuguese then, we do not know any.

For the history of Portuguese motorcycling, this trip is the size of the World. A trip that, it turned out, took about seven and a half years, led the Honda Crosstourer to accumulate 140,000 kilometers, while she and Francisco passed through no less than 62 countries on 6 continents.

Many stories remain to be told in this article, of course, but for those who want more details is the promise that by the end of the year Francisco Sande and Castro will detail all the adventures in a book whose title will be “Around the World in 800 days” – in fact it was closer to 900 days! – and where will continue to marvel those of us who enjoy these adventures with stories where he slept in the open, or with poor families who had almost nothing but who always helped him with a smile on his lips, and ate on the ground, or was attacked by swarms of mosquitoes having been fortunate not to be affected by any serious illness, although they refused to take any medicine.

Francisco Sande e Castro, when he devised his World Tour, idealized it based on a very specific companion: the Honda VFR1200 Crosstourer. So a novelty, this great adventurer is a very heavy bike, as he himself defined when he told us about his countless falls. However she has also proved a faithful companion … and reliable!

According to Francisco, the Crosstourer that arrived at the end of the return to the world is practically the same one that started in September of 2012. We say “basically” because not all the elements and components lasted until the end. After 140,000 kilometers, Crosstourer had almost no problems. The V4 bike has not undergone any deep intervention, not even for tuning valves.

Due to the weight of the whole, and taking into account very rough terrain and for which it was not intended, Crosstourer punished the suspensions. These were the elements that most forced the mechanical intervention, and Francisco Sande e Castro says that he had to replace the retainers several times, while the rear shock absorbed bearings.

The interventions were being carried out by himself, with the help of some “technicians” owners of workshops that he met along the way. Oil and filters were the most replaced components along the journey of 140 thousand kilometers, just like the tires, of course. Still the accounting in terms of material used is not bad at all, and the Honda Crosstourer proved to be extremely reliable even though it has faced some of the most complicated terrain we can find on a trip around the world.